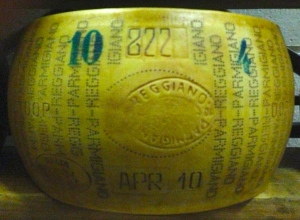 Last weekend I joined a group of gastronomy masters students on a day trip from Bologna to visit a parmesan dairy: the Latteria Sociale Tullia Pavesi Ciro-Rolo. Here, in vast copper-lined cauldrons, gallons of milk is transformed into parmesan 365 days a year, at the rate of about 80 cheeses per day. The dairy combines the use of modern machinery with a astonishing degree of manual intervention at every stage, and we were lucky enough to have Jessica Gatti and the dairy’s main cheesemaker to explain the process from start to finish. Seeing the whole thing in action made me appreciate this delicious product all the more. When you see the work that goes into just a few cheeses it’s easy to see why a parmesan produced like this commands a high price.

The day’s cheese is made from last night’s milk, which has been left to stand in huge steel trays and had the cream skimmed off, mixed with this morning’s milk, which is left whole. At the Latteria Tullia, the milk comes in from a number of local farmers within the Emilia Romagna region, where the cows are grass-fed.*

The two batches of milk are mixed together and transferred into huge copper-lined vats. Some whey kept from the day before is added and the milk is stirred whilst being warmed by steam heat to around 32ºC (90ºF). Rennet is poured in.

Once it has started to coagulate, the curds are broken up by hand using huge long-handled wire cages, a bit like giant balloon whisks.

The curds are ‘cooked’, which makes them start to knit together. The temperature is taken up to about 55ºC (130ºF), and the cheesemaker checks the temperature and feels the curds between his fingers to check the texture.

The heat is turned off and the vat is left for about an hour to cool. As the curds cool down and sink to the bottom of the vat, they form a mass.

Cheesecloths are draped over the sides of the vats in readiness for forming the cheese, and some of the whey is drained out of the vat to make the next stage a little easier. A large metal hoop is dragged through the curds to ensure they are not stuck to the bottom of the vat.

Two men use wooden paddles to lift the mass of curds out of the vat and into one of the huge cheesecloths. With a couple of deft movements, they cut the heavy mass perfectly in two, tying each ‘twin’ into its own cloth and hanging them from wooden poles to start to drain.

The still-wet cheese is lifted from the vat and into a form, still wrapped in its muslin cloth. The base of the cheese is in direct contact with the wooden table, allowing it to benefit from years of previous parmesans’ Lactobacillus, and the top is partially covered with a weight. This is not designed to press the cheese, but to gently keep its shape as it continues to drain.

Once fully loaded with cheeses, the table is wheeled into a cool, tiled room to continue draining.

During this time a cheesemaker lifts, turns, and re-wraps each heavy cheese several times.

Once it is sufficiently drained, he inserts a plastic form to the inside of a pierced steel cheese-mould. This is what adds all of the familiar markings to the outside of the cheese, such as the words ‘parmigiano reggiano’ and the dairy’s details and authentication numbers.

The cheeses are brined by being fully immersed in a cold sea-salt water bath. They stay there for about a month before being lifted out to rest and dry off, held in shape by their steel forms, in a cool, dimly lit area.

Finally, they are transported across the yard to the cheese-aging room, where they will stay for up to three years before being broken open and eaten.

We were lucky enough to taste a cheese made in November 2009 – a perfectly mature specimen of 38 months old. Seeing the care, attention, and sheer hard physical work that goes into making these cheeses certainly made us appreciate this fabulous cheese all the more. Delicious has rarely seemed so inadequate a word.

* We were told that the milk is one of the (many) differences between parmesan and grana padano: although it’s only a few hundred metres away, apparently their cows eat silage, which changes the composition of the milk. I have to say that in the course of a whole day in the area we didn’t see a single cow!