I’m spending most of my time at the moment studying, thinking about, and trying to write about Charles Fourier, the great early nineteenth century utopian theorist. Most people who have heard of him are aware of at least a few of his wilder ideas, many of which are directly related to either food or sex, and all of which depend on dramatic global climate change during which, amongst other things, the sea will apparently turn into a lemonade-like liquid. It’s the food that really interests me, in particular Fourier’s obsession with sweet things. Food is a key component in his social order, and is used to explain and promote his theory of passionate attraction. There isn’t room in my PhD for any recipes (more’s the pity), but I’ve decided it’s important to my understanding of the man and his work to know a lot more about his taste in food. If I’m going to procrastinate in the kitchen, let it be in the name of Charles Fourier!

I’m using as my starting point a gastronomic dictionary from 1839 by the comte de Courchamps: Néo-physiologie du goût, par ordre alphabétique; ou, Dictionnaire générale de la Cuisine Française. I chose it as it seems highly representative of its time and, along with very short recipes laid out in a logical alphabetical fashion, it gives some good social context, too.

In the case of aigre de cèdre, I discovered several interesting things. First, most people (and actually most dictionaries that list it at all) simply translate it as ‘lemonade’. I was always suspicious of this, and now here’s the evidence. Aigre de cèdre is, in fact, a non-alcoholic julep-like drink, predominately made of citrus – but it isn’t lemonade at all. It’s made of citrons (citrus medica, not the citron that is the French word for our standard lemon) and other exotic citrus fruits, but it contains no lemon. Even more exciting, it seems to have become fashionable in the 1830s, while le tout Paris was going crazy over some historical reminiscences from the mid 1600s (a bit like us drinking cocktails and wearing long strings of pearls to watch the Great Gatsby – or is that just me?). Of course, even in the 1830s things just weren’t what they used to be – the poor old consumers were apparently fobbed off with inferior ingredients, and there was no real hope of recapturing this glorious taste of the past.

Why do I find this trivial but excruciating detail exciting? Well, besides telling us he had great taste (it sounds absolutely delicious), it might tell us something else about how Fourier’s mind was working. Perhaps his longing for aigre de cèdre, already archaic in his own time, gives us another little hint about just how far away from the 1830s he really wanted all of us to get. It’s a tiny, subtle piece of evidence that emphasises the fact that he wasn’t inventing a future with no traces of the past.

Here’s the original text from the dictionary, with my translation below. I’d be delighted to hear any comments or corrections. And if anyone knows how much a sectier was, do please tell! 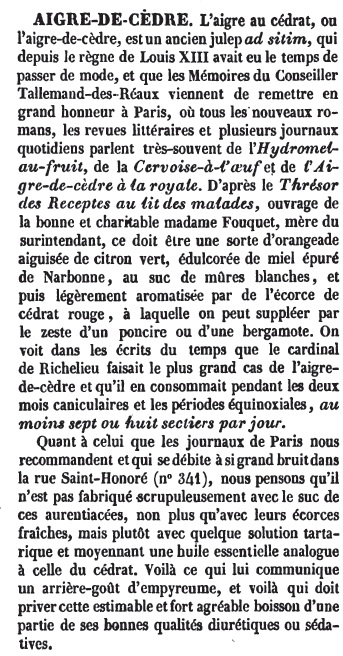 CITRON SOURS.  Citron sours, or citron-sour, is an ancient julep thirst quencher, which has had time to go out of fashion since the reign of Louis XIII, and which the Memoirs of Advisor Tallemand-des-Réaux* has just put back into great favour in Paris, where all the new novels, literary reviews and many daily newspapers speak often of fruit hydromel, egged ale and royal sour citron. According to the Treasury of Recipes for the Sickbed, work of the good and charitable madame Fouquet, mother of the superintendant, this must have been a sort of orangeade sharpened with lime, sweetened with clean Narbonne honey, with white mulberry juice, and then gently flavoured with red citron peel [Citrus medica], which one can substitute with the zest of a Chinese bitter orange [Poncirus trifoliata] or a bergamot orange [Citrus bergamia]. One sees in the writings of the time that cardinal Richelieu made a big fuss of sour citron and he consumed it in the [2 months of the] dog days of summer and in the equinoctal periods, at least seven or eight sectiers** a day.
As for the one that the Paris newspapers recommend to us and which is causing such a stir on the rue Saint-Honoré (at no. 341), we think that it is not scrupulously made with authentic juices, nor even with their fresh peels, but more likely with some tartric solution and a mediocre essential oil analogous to citron. This is what gives an epyreumatic [burnt] after-taste, and this is what deprives this estimable and very pleasant drink of some of its good diuretic or sedative qualities.