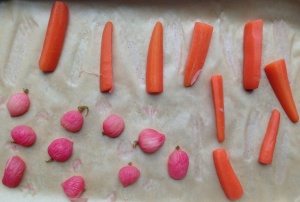 I’ve probably been living a sheltered life, but I’d never come across a semi-dried pickle – until I continued my investigation of Magnus Nilsson’s Fäviken cookbook. Never, it seems, a man to rush things, Nilsson recommends slightly drying out pickled vegetables until “they resemble vegetable raisins” to serve with a hot pork chop. I usually have a good dollop of acidic bramley apple sauce with my pork chops, but am a great lover of a vinegary chutney or pickled anything with cold cuts, so this happy medium between sweet, sour and sharp seemed like an idea worth pursuing.

Of course, it wasn’t completely straightforward. I had to pickle the vegetables before I could dry them. Luckily Swedish-style pickles, which seemed the right choice for a Nilsson recipe, only need 24 hours of steeping prior to use (according to the recipe I looked up on the Saveur site). Phew. With a handful each of radishes and carrots I was away. A few days later they were pickled, dried and ready to go with my luscious chop.

But before you rush to the kitchen the question that must be answered is, what did it taste like? I’d say – hmmm, not bad. The slightly chewy sweetness of the vegetables makes for a nice texture contrast with the pork; the addition of some of the pickling juice to the finished dish brings a little welcome sharpness to help cut through the fat. It was interesting and pretty tasty. But to be honest, although I had some more semi-dried vegetables sliced and at the ready, I ate the second half of the chop with some good old apple sauce. Old habits die hard. And maybe, when this much extra preparation is needed, the end result is more exciting when left to the experts.

2-3 days before you want to eat your chop, lay out the pickled vegetables on a tray lined with grease-proof or parchment paper and put them in a dry place. Turn them occasionally over the next day or two, if you remember. They don’t seem to do much for the first day, but after you’ve turned them a few times they really do start to wrinkle at the edges and become slightly bendy. They will be dry to the touch and a bit chewy when you eat one.

On the day you’re going to eat, make sure the pork is at room temperature, and salt it at least 10 minutes before cooking so that the salt has a chance to dissolve into the meat.

Before starting to cook your pork, cut the vegetables into fine matchstick strips. Sharpen your knife first, as they are quite sticky, almost gummy, and you will have trouble controlling them if your knife is blunt. Arrange them a a beautiful little pile on the plates you’ll be serving the finished dish on.

Melt the light garlic butter in a pan and fry the pork, using the method described in the Fäviken steak recipe until it is cooked to your liking.* Cut into slices across the chop and serve with the vegetables and a few spoonfuls of the pickle juice over.

* Although this method works well, if I do it again I will probably spread some garlic on the chop and grill it, as I usually do, rather than fry in butter. It was a bit too rich.